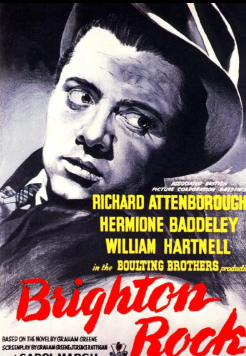 Richard Attenborough is unforgettable as ‘Pinkie’, the brutal gangster who seduces and grooms a simple waitress, Rose (Carol Marsh) in the belief that she could incriminate him in a murder.

The classic adaptation (by Terence Rattigan) of Graham Greene’s novel is a taut and propulsive British crime drama, famous for its stark violence and a memorably cynical ending. It also offers the quintessential evocation of post-war Brighton; its tea-rooms, racetracks and dishevelled boarding houses all starkly captured Harry Waxman's superb, atmospheric cinematography.