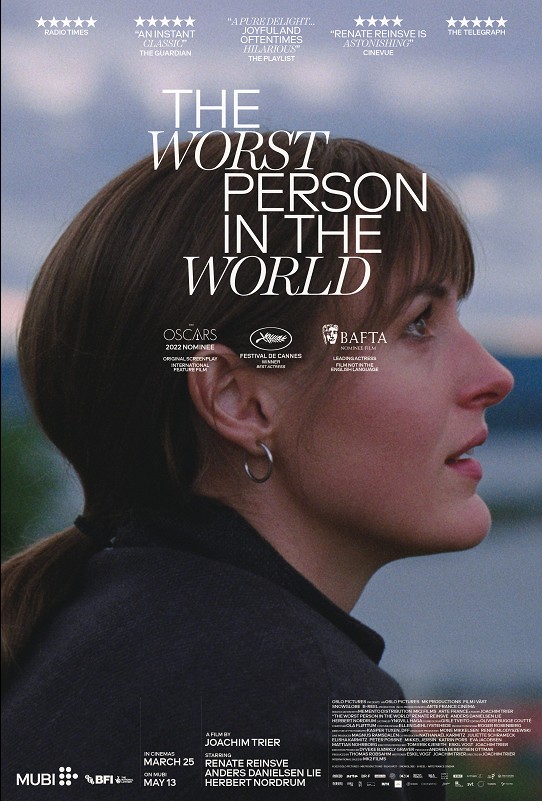 The Worst Person in the World 15

*On Wednesday July 6th, we are holding a HOH subtitled screening*

The latest from acclaimed filmmaker Joachim Trier (Oslo, August 31st, Louder Than Bombs), THE WORST PERSON IN THE WORLD is a wistful and subversive romantic drama about the quest for love and meaning in contemporary Oslo.

The film revolves around Julie (a dazzling star-making central performance from Renate Reinsve), a vibrant and impulsive young woman who, on the verge of turning thirty, is faced with a series of drastic choices that force her to continually reinvent and pursue new perspectives on her life. Over the course of several years, Julie navigates multiple love affairs, existential uncertainty and career dissatisfaction as she slowly starts deciding what she wants to do, who she wants to be with, and ultimately who she wants to become.

Co-starring Trier regular Anders Danielsen Lie and Herbert Nordrum as the men pivoting around Julie’s magnetic presence, this is as much a formally playful character study as it is a poignant and perceptive observation of quarter-life angst. It’s a wry, life-affirming coming of age story told with Trier’s characteristically exuberant flourishes that deservedly won Reinsve the Best Actress award at the 2021 Cannes Film Festival. Nominated for two Academy Awards including Original Screenplay and International Feature Film, and two BAFTA awards including Leading Actress and Film Not in the English Language.

Short film (will be screened before The Worst Person In The World):

SINGLE is an anti-romantic comedy that challenges preconceived notions of life with a disability. Kim, who was born with one arm, gets set-up on a blind date with a guy who has one hand...and she’s pissed-off!