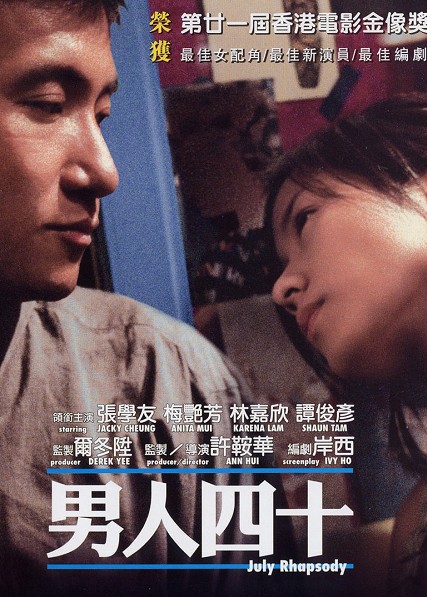 Widely regarded as one of the best works of modern Hong Kong cinema, the multiple award-winning July Rhapsody stars Anita Mui in her final role before her tragic death in 2003. Directed by Ann Hui, the film is a deeply affecting character-driven exploration of broken relationships, destructive yearning and lost dreams, drawing on Chinese poetry and with an impressive ensemble cast that also includes Jackie Cheung and Karena Lam.

The story revolves around high school teacher Lam Yiu-kwok (Jackie Cheung) and his wife Chan Man-ching (Anita Mui), who initially seem to be living the perfect family life. However, tensions lurk in the shadows, and when a student (Karena Lam) falls in love with Yiu-kwok and a figure from Man-ching’s past reappears, the cracks in their relationship start to show, throwing them into emotional turmoil.

Film director, producer, screenwriter and actress Ann Hui is one of the most critically acclaimed filmmakers of the Hong Kong New Wave. She is known for her films about social issues in Hong Kong which include: literary adaptations, martial arts, semi-autobiographical works, women's issues, social phenomena, political changes, and thrillers. Among her key works are her Vietnam trilogy, Summer Snow, July Rhapsody, The Way We Are and A Simple Life, and her most recent work is the 2020 Love After Love. Hui’s films have won a long list of awards in Hong Kong and around the world, and she has served as a jury member at many international film festivals - in 2020 she was awarded a Golden Lion for Lifetime Achievement at the Venice International Film Festival.