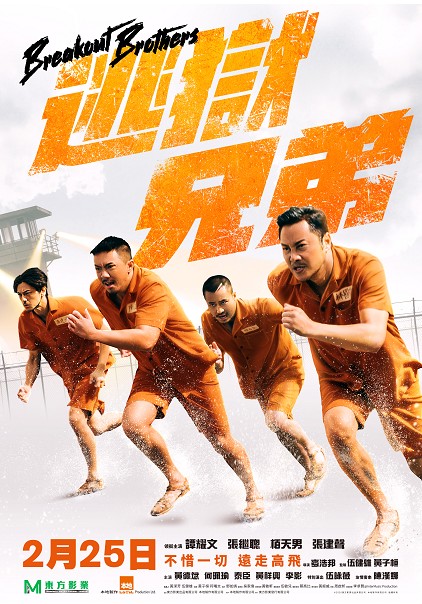 Wildly entertaining and cleverly plotted, Breakout Brothers is a stylish prison caper thriller in the classic Hong Kong style, and was a surprise smash hit at the box office.

After being scapegoated for a botched construction project, Tin is sent to prison, sharing his cell with Chan, a good-hearted small time crook. The prison is divided in two camps, led by triad leaders Roller and Scar, and when Scar is hired by Tin’s former associates to silence him, Tin and Chan start to plan a desperate escape. Things become more complicated when Roller decides to join them, and they come up against corrupt prison authorities as they try to figure a way out. Combining action, comedy and drama, Breakout Brothers is a fun throwback to the prison escape genre in fast moving and thrilling fashion.

Mak Ho-pong started his career in films in 2002. He was the assistant director for Tsui Hark’s Seven Swords (2005) and Yuen Woo-ping’s Master Z : The Ip Man Legacy (2018), and was the screenwriter for Herman Yau’s Dating Death (2004). In 2018, he directed his first feature The Lingering. Breakout Brothers is his second feature film.